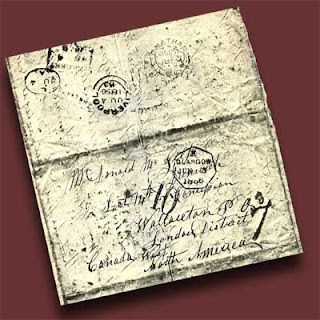 In 1851, Donald McGilp ("McKillop"), his wife, and all of his children, left Knapdale for Canada West (now it's known as Ontario). Some letters written from his Knapdale friends and relatives survived in a small wooden box until his great great granddaughter found them and copied them. They have already been carried in the website, Kintyre Mag, but since that site is now in hiatus, I have put them up on Knapdale People. Also, I have indexed all of the people mentioned in these letters. You can find this alphabetical list at the "Donald McGilp" section in my site.

There is a lot to be said about these letters: the strong religious faith of the writers just glows in every letter. It should be remembered that this group of friends were members of the breakaway "Free Church" of Scotland, and were therefore more religiously intense than their neighbouts.... but then again, who knows?? We live in a secular age and place, and sometimes, for some people, this intensity is embarrassing, which is a pity.

There are a couple of letters from Archibald McMillan, one of Donald McGilp's many nephews. In the 1850s, he was living in Robison County, North Carolina, and he was the owner - the proud owner - of some 40 slaves. As he notes, he was now living as well as the Factor back in Knapdale. Yet, he was also a religious man. After reading these letters, there is plenty to think about and... discuss!

Note that the American Civil war was just over the horizon from these letters.
Posted by Heather at 11:31 AM 1 comment:

There is something about original documents that is fascinating... the handwriting, the casual references that are strange to our time, etc. I have a copy of some Inverneil Estate papers on microfilm, and am in the process of working through them a second time, in order to smarten up my knapdalepeople data base.

Two items have jostled their way to my attention, and it would be marvellous if someone out there has anything to say about either:
1. in determining the volume of grain, etc., owed by the tenant, the papers use "pecks" according to "Auchinbreck Measure."
and
2. the leases were (in 1819 at least) based on "... Reservations and Conditions and Regulations and Rotation of Tillage expressed and contained in .... the first BOOK OF SETS OF THE ESTATES OF TAYNISH, ULVA AND DANNA...."
Posted by Heather at 8:17 PM 2 comments:

I have just returned from the San Francisco Comic Book convention. It was filled with people rummaging through vast stacks of old comic books (encased in plastic pockets, the better to preserve them for all time..); and of course, lots of people dressed up as their favorite comic character (even one who had an extremely impressive and scarey Alien costume.) There were lots of old "Classics Illustrated" comics (which I read instead of reading the book itself).

Which brings me to an important realization: there is a new kind of comic book out there, folks! No more line drawing, pale colors, or cheap paper. Today, there are "Graphic Novels". And they can be BEAUTIFUL. Check these sites for renditions of Neil Gaiman's works, and go to the mother ship of "graphic novels" at Marvel Comics.

You may have heard of the very spectacular movie about the Battle of Thermopylae, "300." It is based on Frank Miller's graphic novel, "300", published originally by Dark Horse Comics.

And how does all this relate to Knapdale? Well. Think about all the great Celtic stories and adventures, and creatures; and the wonderful art work evidenced in the "Book of Kells" (written on Iona) and the stone monuments scattered over the landscape! THIS IS THE WAY TO TEACH HISTORY, FOLKS! Somerled; the Arichonan uprising; the McLean attack on Gigha; the adventures of Major General Sir Archibald Campbell of Inverneill... and all the stories buried in 19th century books.. are just waiting for artists and publishers to start mining them.
Posted by Heather at 12:35 PM 1 comment:

According to Somerled MacMillan:
'.... From the well-known Niall Glun-Dubh (Black-Knee), High King of Ireland, who was slain by the Danes in 917 AD, the descent ran -- (...to... ) Aedh Alain (Hugh Splendid) who died in 1047. Aedh Alain had a son called Dunslebhe (progenitor of the MacLays or LIVINGSTONES), and from the latter's sonSuibhne or Sween, sprang the MacSweens.

Sween's lands' were well fortified. Castle Sween dominating the western sea-board and abptly called 'the Key of Knapdale', also Skipness Castle, built by him, which dominated eastern approaches to his lands in the Barbert and Cowel areas. One of Sween's daughters married Sir Colin CAMPBELL of Loch Awe, by whom she had IVER, progenitor of the MacIvers of Asknish in Glassary, and TAVISH, progenitor of the MacTavishes of Dunardary in North Knapdale. In order to make a more powerful alliance, Campbell repudiated Sween's daughter. This naturally led to a feud between the Campbells and the MacSweens. The lady, deserted by her husband, was remarried to MacLachlan and received as a dowry from her father all his lands in Glassary, namesly DUNAAD, DUNAMUICK, AUCHENSCHOLLOCH, SHERVAIN AND BRENCHYLIES, which subsequently became the property of the MacLachlans....
(And more on this MacSween bunch tomorrow)
(Somerled MacMillan, 1960, "Families of Knapdale.")
Posted by Heather at 7:34 PM No comments: