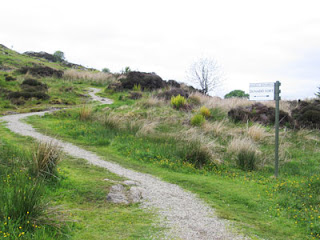 Dunadd is a rocky outcrop a few miles north of Lochgilphead. There is little left of its past now. But back in the day, when the Scottish tribes came from Ireland and settled in the West Highlands (about 500AD), they fortified it ("Dun" means "fort"), and made it the capital of their country, which they called "Dal Riata."
This hill sits in the middle of a very large bog, Mòine Mhòr (Great Moss) now largely drained through the efforts of the Malcolms of Poltalloch, but through most of time, an excellent part of Dunadd's defensive system. From its height, you can look down on the Kilmartin Valley and the River Add... quite a lovely scene! 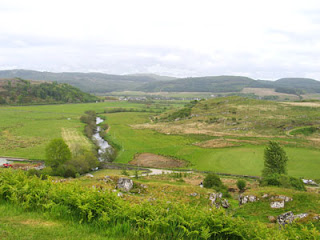 There is every reason to believe that men were anointed as kings on Dunadd's summit. You can still see a large, worn, stone which features a foot-shaped depression, as well a cup-shaped depression. At one time, the stone also displayed a carving of a boar (very kingly beast), and I suppose with a lot of imagination, its shadow still remains. I am sure I saw the drawing a few years ago on a previous visit, but time goes by and events happen, I guess. 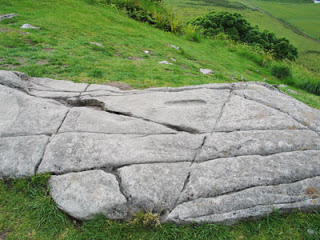 The Vikings, on their longships, arrived on Britain's horizon in 791, and changed everything in the Western Highlands. Dunadd was no longer tenable as a capital. By 850 AD, around the time of King Kenneth McAlpine, the Scottish leaders had moved their headquarters east, away from the coast, to Scone, near Perth.